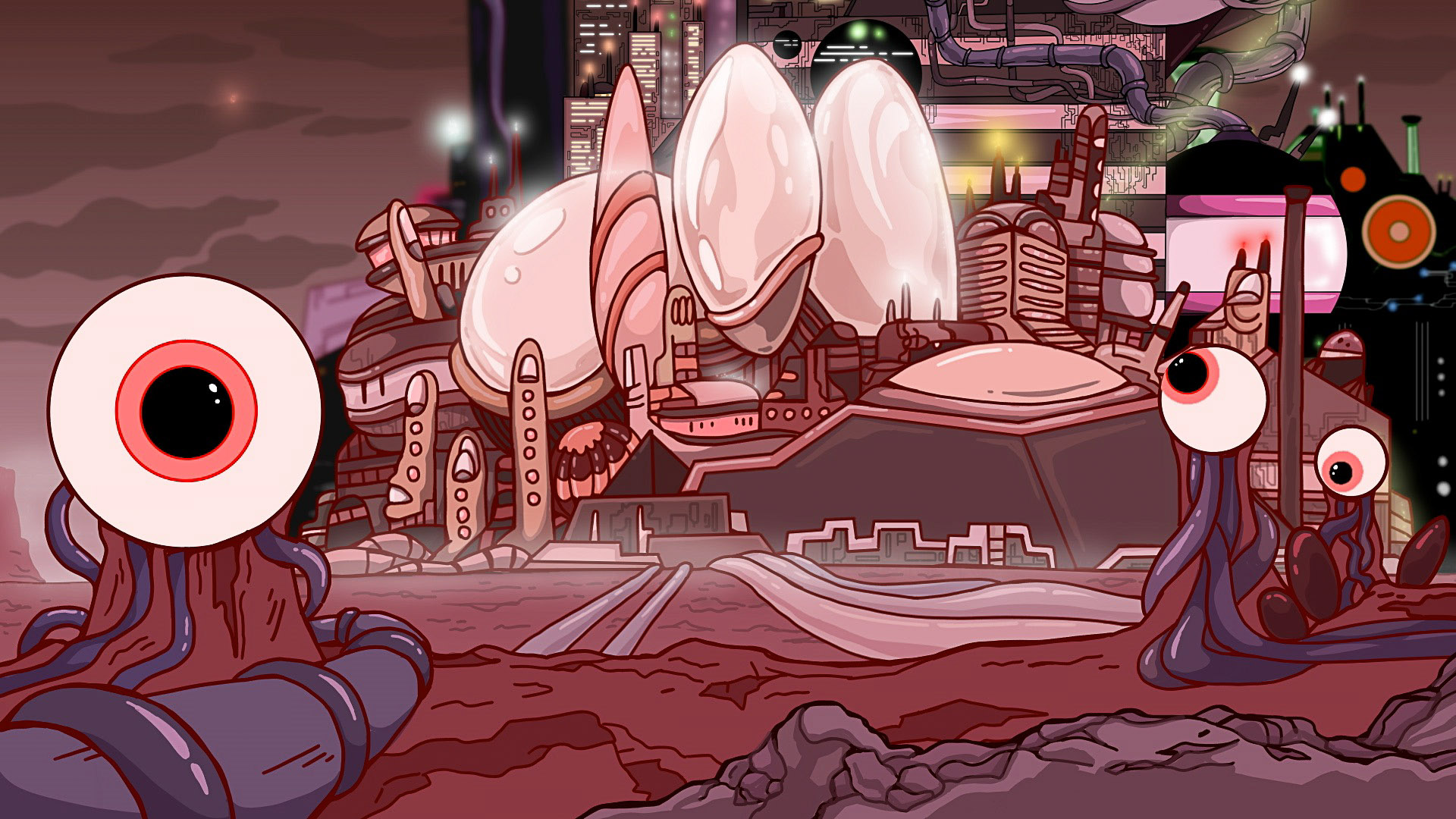 In our very first interview of the renewed The View Magazine, we talked with Micah Buzan, a musician and animator who’s clients include The Claypool Lennon Delirium and The Red Hot Chili Peppers.

Hi Micah, how are you? What have you been up to lately?

The first half of this year I was building my website where I sell Animation Loops for Video artists and VJ’s to edit in live performances or videos. Having ready-made clips for creative professionals is a good way to supplement custom animation work. Freelancers live in a world of feast or famine – sometimes you can go months without a project, and then all of a sudden you’ll have a dozen offers in a week, but not enough time to tackle everything you’d like to. It’s important to figure out ways to generate income that isn’t dependent on a job or client work. The internet allows creative professionals to make digital products they can sell on places like shopify or gumroad.

In terms of client work, this Summer I did a music video for The Claypool Lennon Delirium called Little Fishes, and made tour visuals for The Red Hot Chili Peppers.

Tell us a bit about yourself.

I’m a self-taught animator and musician. I like to walk in the woods, look for turtles, and think about things. 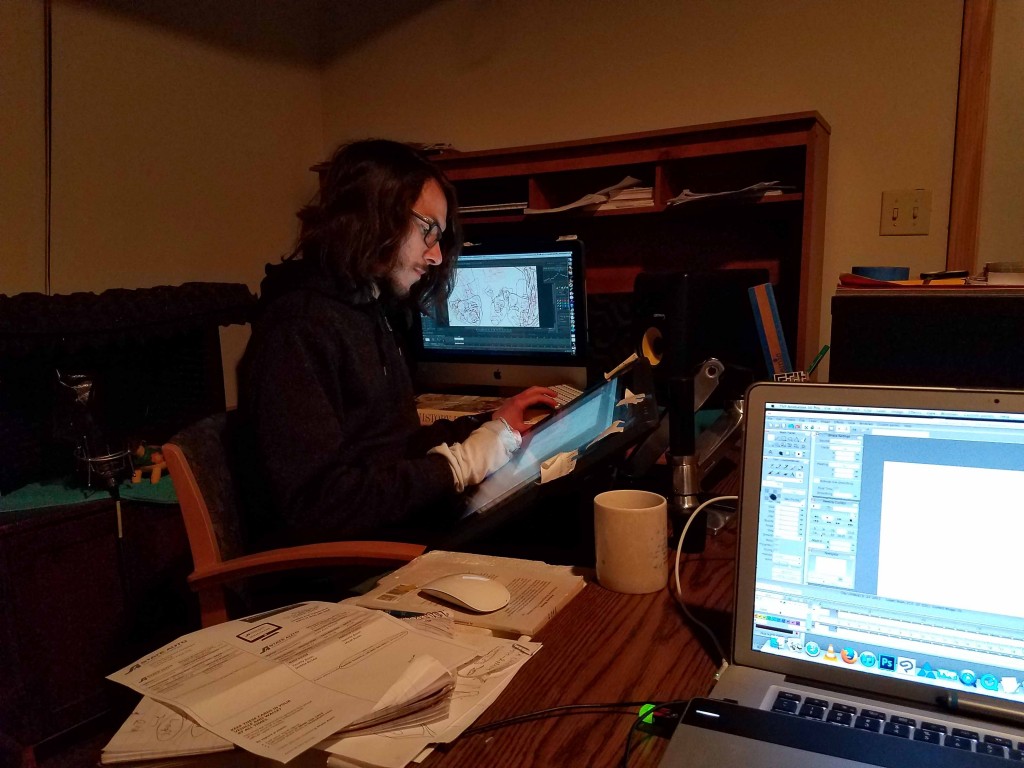 What was your first exposure to art and how did that impact you?

Nintendo and Sega games had a big impact on me growing up in the 90’s (I was born in 1989). The variety of environments in Sonic The Hedgehog still stand out to this day. Disney films like Fantasia, Pinocchio, and The Lion King were watched often. I started really drawing obsessively in 6th grade when DragonBall Z was airing on Toonami. My friends and I would draw our favorite characters and compare who could get closest to the DBZ look. I was lucky to have a family who always encouraged me to draw and follow my interests, and I owe a lot to my development thanks to their support.

Take us through your creative journey.

I obsess over different ideas. It’s kind of like the opposite of Attention Deficit Disorder, where a person’s focus is easily distracted and spread thin. In my case, I over-think or get stuck on a single idea for 10 hours straight. This can help with the time-consuming process of animating, where it’s not uncommon to spend an entire day thinking about and drawing just a few seconds of animation. There is balance of course, perfectionism is the enemy to productivity.

You are mainly known as an animator, was that your choice from the start or did you explore other types of art?

Before making animation ,I was writing and recording solo albums. When I was 19, I made a flipbook animation to one of my songs, and have been obsessed with drawing animation ever since. In 2013 , I did my first animation for the band The Flaming Lips for their song “Look The Sun Is Rising”. That experience taught me that you could make money from videos over the internet as opposed to doing it only as a hobby, and I have been trying to stay busy with client work ever since. Unfortunately, this has meant I’ve had less time to do personal projects. 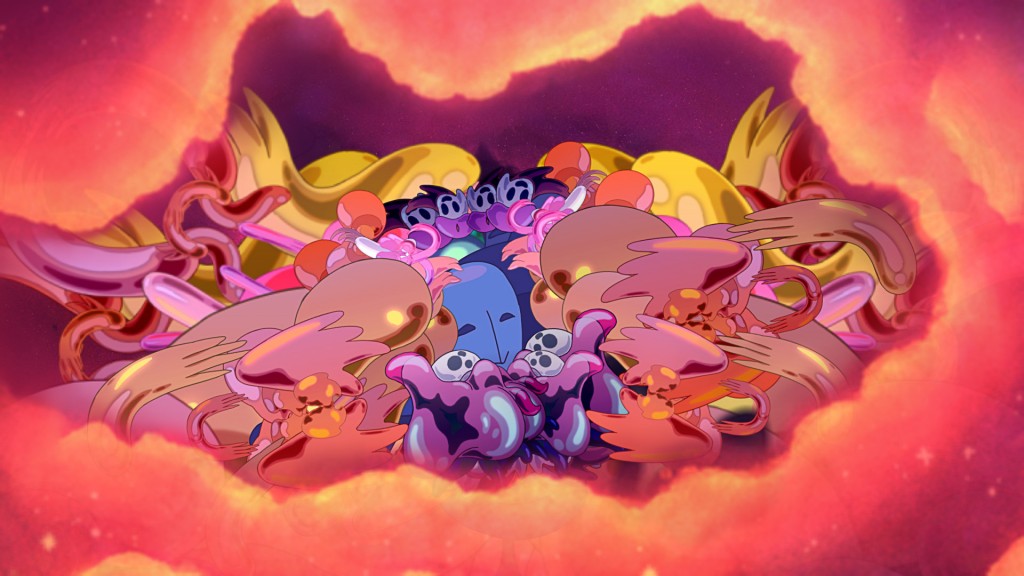 What is it about animation that you like so much?

You can make anything using only paper and pencils (or a drawing tablet and pixels). You are not bound by the laws of physics or the limits of human actors.The only limit to what is possible is your imagination. The moving nature of animation is lot like music – music and animation are in a constant state of flow, and I like getting lost in the rhythm of that flow state.

What are some of your favorite artists and works on any medium and why?

Hayao Miyazaki is a master visual storyteller. I like the goopy cel shaded creatures and effects in Ponyo, Spirited Away, and Princess Mononoke. Katsuhiro Otomo and Satoshi Kon are also
some of my favorites animators from Japan. The music video for Radiohead’s Paranoid Android scarred my puny brain when I saw that as an 8 year old, and I have been fascinated by all their records ever since (Kid A, Ok Computer, and In Rainbows are the Holy Trinity of Radiohead albums).

Tekkon Kinkreet is probably my favorite manga (with Akira). I also love japanese woodblock prints. I’m really influenced by a lot of eastern stuff. But I also love all the old Disney films and
the black and white stuff like Steamboat Willie. Ub Iwerks was a genius.

I also enjoy reading in my free time. I read more than I watch movies. But my girlfriend is helping me catch up on movie watching. I mostly read non-fiction (business, psychology, directing, and animation books).

Take us through your career. What have the ups and downs, key learnings, things that made you a better artist?

I feel like I still don’t know what I’m doing. Every project presents both ups and downs simultaneously. I think the trick is to try to stay level headed and work as hard as you can while not overthinking it.

Can you tell a bit about some of the best advice you received during your career so far, either from colleagues or elsewhere?

Focus on one thing at a time. Don’t forget to get up and stretch. A daily walk works wonders for your body and mind. 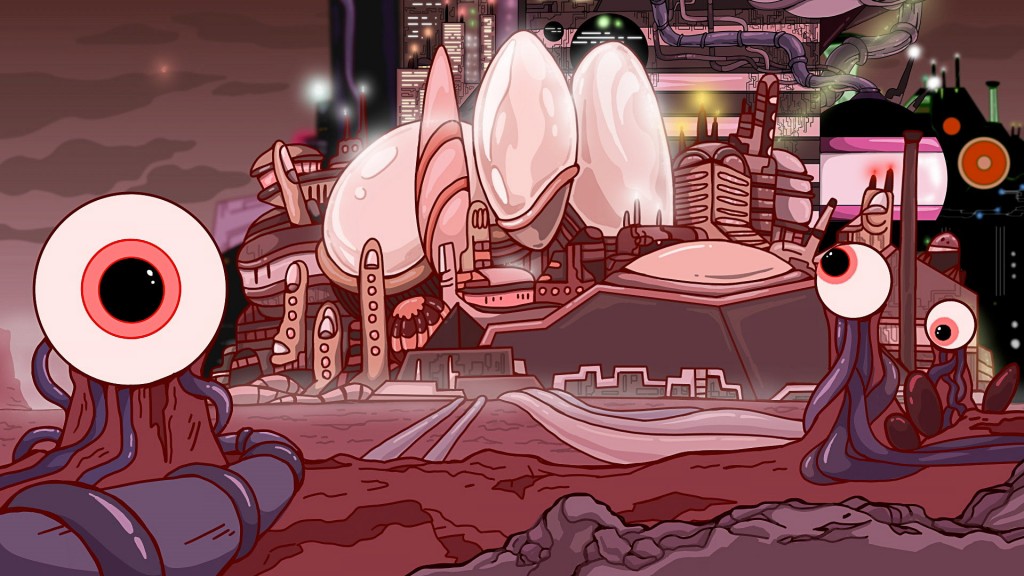 You are very active with personal projects, how does that benefit you in terms of personal development?

The great thing about personal work is there is no one depending on you, no client to tell you what they need, so you have boundless creative freedom to experiment with new styles, new software, and new ideas. This creates a safe incubation stage where you can build up a library of new ideas to use later on in client work. The downside to personal projects the lack of restrictions often leads to lack of discipline. Self-imposed deadlines can be helpful, as well as narrowing down which sketches to focus on. Saying yes to one thing means saying no to everything else for the time.

How would you describe your style? How can people see something and say “hey, that is definitely done by Micah”?

I always have to tell people I don’t do any drugs. So I guess “trippy” is a word I hear a lot. But I’m not particularly interested in psychedelic culture or anything. When I hear music, I see weird floaty shapes and morphing forms in my mind. With animation, I like to try to capture some of that abstract imagery and project my dreams onto a screen for others to see. Words can’t articulate the full nuances of how any of us ultimately feel or think. We can say “I’m sad” or “I’m happy”, but such definitions oversimplify the universe of feelings, memories, and thoughts colliding inside our heads.

Artists can be inspired by many different things. Where do you get inspired and how do you process those into your own ideas, concepts, and designs?

I heard this quote “the work will show you how”. There’s no lack of inspiration in the world. There’s more content today than a million lifetimes could ever consume. Endless inputs for inspiration. Sitting down and getting to work is the best cure for artist block. Draw a single line. And go from there.

For your own projects, can you take us through your pipeline/workflow? What software and hardware do you use in each step and why? How has this flow changed over the years?

I started out animating on paper for music vids. Eventually I got TVPaint, which is a great software for emulating the traditional cel-animation aesthetic. While I used to animate in a straight-ahead, stream-of-consciousness manner, I’m now a bit more methodical in my approach. The first stage is thinking about all possiblities. All ideas are welcome and the inner-critic is turned off. Then I make rough thumbnails of story images that will tie the mood together. The thumbnails are refined at the storyboarding stage, and then I’ll make an animatic out of the storyboard panels to match the shots with the timing of the song/soundtrack. Then I’ll often use the animatic panels as key frames from the animation, add some more key frames to define the shot, then draw a bunch of in-between frames to make the motion smoother. 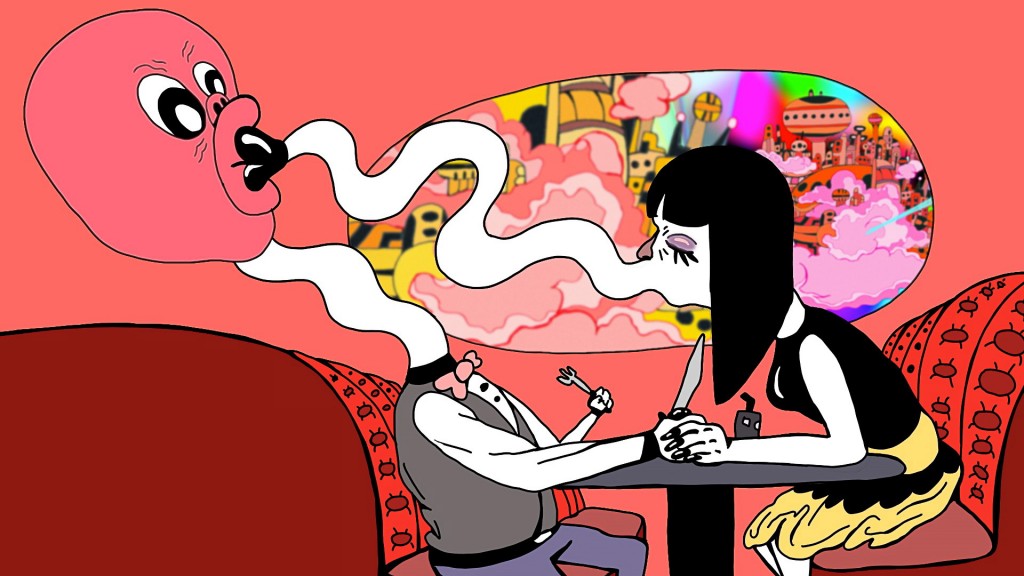 Almost always, an artist is part of a team. In your eyes, what are the factors that separates a regular artist from a great one in terms of working together?

Focus on the quality of the work. Don’t blame others. Don’t be afraid to sacrifice an idea you had to make room for someone else’s idea if it will truly benefit the project. On the other hand, don’t be afraid to explain why you think your idea would work best. The quality of the work comes first. None of this would be possible without the help of my awesome animation partner Brittany Penn, who assists and collaborates on music videos and tour visuals.

What is the craziest project you have ever done so far?

Doing live visuals for Incubus was a big mind shift. In addition to animating visuals for the big screens, I created artwork for the stage design. I flew out to work on sight around other people. I’m used to being a hermit, so it was a mind-expanding experience to be surrounded by noise and chaos and people looking over my shoulder to see what I was working on while I tried to concentrate. Although I prefer to communicate via email, this experience forced me to buy a flip phone.

If there is one character, full feature, or short that you wish you have made, what would it be and why?

How do you think animation will be in the year 2025 and what kind of purpose will it serve?

I see a lot of potential in games and VR. It might be cool if we revisited the full motion video games genre that doomed the Sega CD in 1993. I bet now with systems like the Nintendo Switch being so successful, animated movie games could be much more interactive and employ more 2D animators.

What are your personal goals for the next two to five years?

There’s a project that’s been in my mind called “The Terror Of Babel”. It’s loosely inspired by the Tower Of Babel story in Genesis from the Bible. Lately I’ve been fascinated by behavioral psychology, tribalism, and cults. I made some background art and have been writing music for 5 years now to use in the film. I hope to set aside some dedicated time to really flesh it out. I’m not sure if it will be a short or feature length, but I want to make comics that could act as source material to structure the film from and test story ideas before committing to full animation.

After a week of hard work, where is the one place you go to relax and just enjoy free time?

Barnes and Noble Bookstore. The library. The woods.

Thanks for chatting with us Micah!

Check out more of his work below.