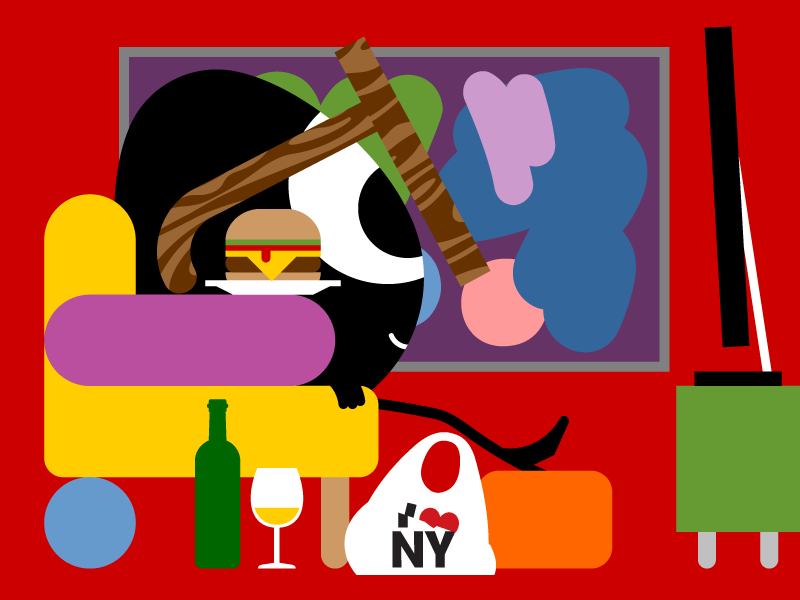 The View magazine hooked up with Darcel, and Craig, the creative artist behind Darcel. He tells about how he got in touch with creativity, the move from Down Under to Big Apple, collabo with Colette Paris, and much more.

TV: Hi Darcel, what have you been up to?

DD: Really fascinating things like rewatching The Wire, avoiding the blazing heat, slinking around galleries, getting into eBay, painting, and petting my cat.

DD: I grew up on the east coast of Australia in the 80’s, a very bright and kitsch place that has pretty much made the person I am today. I went to college at the Queensland College of Art which is in a city called Brisbane, then I moved to Sydney for a while before winning the Greencard lottery after which I fled to New York. When I got to New York I started the blog DarcelDisappoints.com which acts as an illustrated diary of my life.

TV: Have you always been creative in some way?

DD: Yep, when I was a kid I used to walk around with a gridded sketch pad redesigning my grandparents houses, recommending what walls to knock down, what paintings to put where etc. My dad is a weekend painter so we always had art books lying around and I have pads filled with my tracings and reinterpretations of famous Australian paintings. I seemed to focus on rather grotesque work, like that of Albert Tucker, for whatever reason.

TV: At what point did you think “Illustration is my thing.”?

DD: I have never felt that way. I studied design at art college and ended up doing illustrations after I graduated because I had clients who couldn’t afford imagery, it was up to me to create them. I’ve never felt entirely comfortable “illustrating” things, I see it more as creating an image that relates to an idea, illustration just happens to be the means to the end, the medium, for better or worse.

TV: Take us through your creative journey.

DD: I was part of a collective called Rinzen for a while after college, for 10 years in fact, and we had a relatively detailed visual style, so creating Darcel was my way of stripping my work back to it’s basic elements. I wanted to find a way to say much more with much less. Doing that affected all my other work too which was great (I’m also half of Craig & Karl), it simplified things for me and allowed me to take a critical look at what I was creating instead of being consumed by just technique and style.

TV: What makes a good illustrator, or visual designer in general?

DD: Being constantly aware of your surroundings is a good start. For me living in New York really helps, I’m constantly being inspired by the stuff I see around me, whether it’s a random incident I see in the street or a mega show at a gallery, being open to all these different and diverse influences makes for a good and constantly evolving creative mind.

TV: Can you share about your creative workflow, the A to Z process, sideways, etc?

DD: Most of my ideas for the blog come from me walking around the city. The blog is essentially a snapshot of my life (what I did, where I went, what I thought) so really it’s just a matter of focusing on the more important or relevant elements and figuring out how to draw it. Usually it’ll be an idea I have when I’m walking to my studio, then I’ll sit down and draw it out and give myself 24 hours to think about it before I post it. It’s usually the posts that make me the most uncomfortable that people respond to the best (usually where I reveal too much about myself) so I try not to censor anything.

TV: What were your biggest challenges and how did you work it?

DD: Probably self motivation. I’ve been doing the blog for seven years, sometimes it’s a lot of fun, sometimes it’s a pain, but having worked for myself for a long time now you get practised at committing to your own set of rules; what time to get to the studio, how many posts you need to do a week etc. It requires pretty strong self disciple but I am always reminded how lucky I am to have the freedom to do as I please, artistically, and that keeps me going.

TV: For the gearheads out there, what hard and software do you use?

TV: You did a collabo with Colette, tell us about that?

DD: Sarah (the owner of colette) discovered the blog early on and we have been working together on projects ever since, almost 7 years now. She had the insight to see potential in Darcel and I’m forever grateful for the support she has offered over the years, it’s because of her that I’ve been able to exhibit in Paris a couple of times, create stuff for a Chanel pop-up and met and work with lots of amazing people.

TV: And now you are doing something for Paris Fashion Week?

DD: I was in Paris last fashion week to launch a special piece I did for Mira Mikati, I designed a bomber jacket which formed part of her collection. I’d met Mira before and we were into similar things so it seemed like a good fit. She gave me free rein to create pretty much whatever I wanted, the end result was a loose collection of Darcel iconography spread across the jacket; cigarette butts, loose phrases, nonsensical scribbles and champagne which all come together to form a chaotic whole.

TV: With so many artists these days, how do you differentiate yourself? How can people know that a certain piece is a Darcel?

DD: Darcel has a pretty distinctive look, he’s a black egg with one eye so you can’t miss it if you see him around. When I made Darcel I wanted him to be as simple as possible so I could twist him into different positions and situations on the blog easily, I wanted him to be easy to adapt over the years. I made him and bought the dot com in one afternoon, I was Googling for names and came across ‘Darcel’ – it means dark or darkness in French which seemed appropriate considering his/my dour attitude.

TV: What is next for you?

DD: I just finished a whole bunch of new stuff with Colette, like redesigning their shopping bags and other store collateral like stickers, wrapping paper, tape, the website etc. – that was cool, I always feel very lucky when Sarah asks me to do stuff like that.

TV: Aside from illustration, anything else creative you spent time on?

DD: I paint a lot, as Craig & Karl I work with different brands as well as real world stuff like murals and installations. I mess around with furniture ideas, I do animation sometimes, I’m happy to let my work evolve and see where it takes me.

Images are copyright to Darcel/Craig, Mira Mikati, or respective owners.

Check out his diary, and his collabo with Mira on her Insta.

Darcel, and Craig, the creative artist behind Darcel