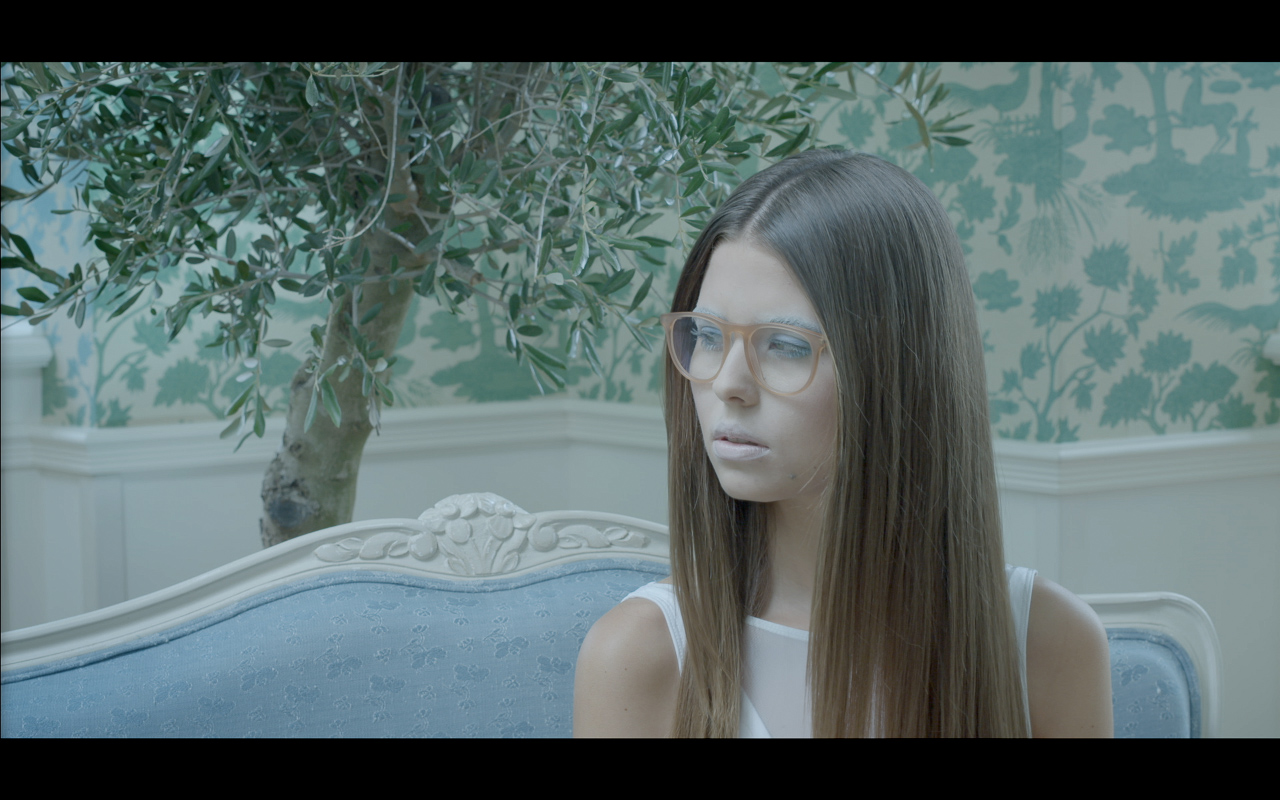 A big interview with Leonie Steeger, de filmmaker behind the fashion short film Voluptuous. We talk about the team, concept, workflow and challenges. She also shares a ton load of Behind The Scenes and moodboard images. Read on to learn what it really takes to produce a proper movie.

TV: Can you introduce yourself and the team?

LS: Sure. My name is Leonie Steeger and I am a German filmmaker, producer and art director. The core-team that started working on the concept of “Voluptuous” over a year ago was Nick Byerly, Fatmir Dolci and me. Nick worked on the visual concept including Storyboards etc. while I worked out the overall look, the feeling and the production design. Nick is our director of photography and Fatmir was his 1st camera assistant. Later on we added the rest of our crew, Viola Finkenrath and Hannah Jesse worked on the hair and make-up as well as the fashion. Alisha Weder and Franziska Schweiger turned my set design concept into reality and Marvin Stindt, Philip Hallay and Martin Olmert were included a few weeks before shooting as gaffers and key grip. Our on-set production was Asadeh Khakban and our wonderful still photographer Julia Haack. Last but not least our lovely models Julia Wieczoreck and Manuel Zenker completed our team.

TV: Tell us about the concept? How did this come about? What do you have with fashion personally?

LS: I consider myself, without sounding like a complete klutz, as quite a fashionable person. So making a fashion film seemed rather natural to me. We knew early on that the film would be revolving around six pairs of glasses which were made by Berlin based designers OWLoptics. So we tried to figure out what glasses could mean in a film and ended up with a three key words: identity, perspective and knowledge. The kind of fashion film we make has a story, but that story is very subtle and metaphorical and only appears to its fullest after really watching out for the details. We roughly tell the story of creation beyond the way it is displayed in the bible. We used some typical biblical items like figs, naked bodies, a pomegranate, snakes in the form of ropes and wine. The story can be broken down to two people entering a new world, discovering paradise, eating from the forbidden fruit which leads to them becoming ashamed of their naked bodies and turning them away from god. This eventually leads to gluttony, pollution and greed for power. However in the end they realize what they have become which eventually lead to their extinction and they flee back to wilderness without their clothes – solely wearing the glasses. Based on that concept we started a very associative montage of mood images with slight movement in them. Every picture is set to be seen with the one before or after in order. This is how the story evolves and works. Naturally the editing concept was already done before we even started shooting.

TV: How was the team formed, was it organically or did you needed to pitch the concept? How about the actors?

LS: The core team was already given and most of the other crew members were people who I had already worked with in the past or who were strongly recommended to me by colleagues. For example our awesome layout-designer WIlli Harder, who created our website. Only the make-up artist Viola was someone who we hadn’t worked with yet and the models of course. We casted quite a few protagonists until we found two who we really liked. It was important that we found a dominant female model and a male model who could act like being subjected to her.

TV: Can you share a bit about the preparation and pre-production? What has been done and who were involved?

LS: Most of the pre-production time was spent on finding a suitable location. Furthermore crew and cast housing and getting the money together as well as calculating on what to spend it on. I managed the main production process and Nick was the man for the numbers. (laughing). We drove many kilometers in search of the perfect setting for our film as it was important to me to only have one single location. This reduces lots of costs and maximizes efficiency while shooting. A good team spirit is one of the most essential things to have on set so we wanted to sleep and live in one big house together while shooting. It was an amazing experience, we all felt like a big family and got to know each other very well over the duration of the five day shoot. There is the saying that a good catering is the thing that will determine the quality of your film, which is more than true. We tried to always have good and fresh food in stock and arranged catering for everybody long time before shooting.

TV: Take us through the creative workflow. How did the filming days look like?

LS: A day at the set starts with getting up quite early. A quick breakfast in the kitchen of the house and then Nick, Fatmir and Marvin leaving together with set-producer Julia for the location to set up the shots and creating lighting for the day. I stay behind with the models and we talk about the scene we are about to shoot. When we arrive at the location Alisha and Franziska are arranging the set by preparing all the props. I am supervising the Production design and check on the models outfits. The models go into hair and make up and about two hours later we start shooting. As soon as the lighting situation is okayed by Nick, gaffer Marvin moves to the next setting and starts arranging his lamps. We usually do two or three scenes a day depending on their length and complexity directed by myself. Around noon we all assemble around the big table and have lunch together, drink some coffee and talk. Then we continue shooting till about 7 or 8 pm and all head back to the crew house for a beer and dinner.

TV: The film obviously has a certain style and mood. Was this clear from the start, or did you try out different things during post?

LS: Yes I would say the style of the film was pretty much determined before shooting and the post-production. But of course small things always change as other creatives, like composer Sascha Thiele or cutter Marvin Perchner ad their own style to the project. The music especially is something that just doesn’t exist while you are planning and shooting. It is something that develops after you have given the first cut to the composer who then tries to transfer your ideas into sound. It is the thing you have the least control over so having a talented musician is crucial. I feel very blessed to be able to collaborate with Sascha because of his talent and skills. The other thing that really makes a difference is a good color grading. Grader Michael Stutz did an excellent job on the overall look of the film and through his input we slightly changed the mood of one or two scenes just by making images lighter or adding more contrast/saturation to them. The grading is something that if it is done correctly isn’t noticeable at all but lets the viewer watch smoothly and enhances the DOP’s vision.

TV: What kind of intention did you have in mind during the cutting?

LS: The cutting process was already arranged before shooting in order for the film to work as it was intended to. So editing meant finding the right timing for the right image. Marvin Perchner was in constant dialogue with composer Sascha and they managed to merge image and sound in a very nice way. It was important to me that the two mediums supported each other, I think in the end you can tell that they were created together since there is a certain flow. The energy of the images is enhanced by the music and vice versa. The most important mindset during the editing process was to arrange the images in a way that captured the speed and the dynamics from within the moving images even if there was very little movement.

TV: Making a film always comes with unique and regular challenges, can you tell about those? How did you solve them?

LS: I can’t go into detail, but every filmmaker will tell you that getting all the money for your film together is the biggest challenge you have to overcome. Finding sponsors, people who give you reduced prices in exchange for work and finding the best cast with a small budget is a huge challenge that is often overseen. But there is always a way of getting your project done. Always, you just need to find it. Furthermore there are certain points during the process that make you want to quit or do something completely different. In such a case it is important to talk with the core group and exchange all the doubts you have, cause in the end it will be worth working through them. And the moment when people start clapping right after they saw your film for the first time is totally worth the effort and sweat you put into it.

TV: For the gearheads among us, what software and hardware did you use?

LS: From a very early point on Nick wanted to shoot on the Sony F55. He ended up shooting in 4K Raw at 60fps which was later downgraded to HD Scope (2,35:1) and 25fps. Shooting in Raw has upsides and downsides. The upside clearly is the huge image-data and bit depth you have at your disposal, which comes in really handy during the grading process. The downside is the mind-blowing file sizes along with the data transfer time. On set the camera was mostly moved on a jib-arm with a dolly underneath it. The dolly was always pushed on tracks to ensure smoothness. During two scenes Nick used a steadycam to follow the actors during running scenes. The dailies were viewed on set using the Sony-RAW viewer and later on transferred to Adobe Premiere CC for the editing process. The F55 captures the RAW files in addition to smaller XAVC Proxies which were used for the editing. The XAVC files were later on replaced by the much larger RAW files in preparation for the grading process which was done entirely within Davinci resolve 11.

LS: I absolutely fell in love with the whole process of making fashion films, so naturally that is what we will be doing next. We are already working on a concept, but the rest is our secret. (smiles).

TV: Thanks Leonie, for sharing so much insights on this film.

“A dainty survey about lust and desire, incursion and thievery. Displayed not as a deadly sin, but as a nerdy study of lifestyle between fashion and fanaticism, composure and consternation. Devoted to all the cinematic illusions of attainability and noncompliance. Inflated in todays magazinworld-culture between the beautiful glow of digital magic and lush analog corporeality.” – Peter V. Brinkemper about the fashion film “Voluptuous”