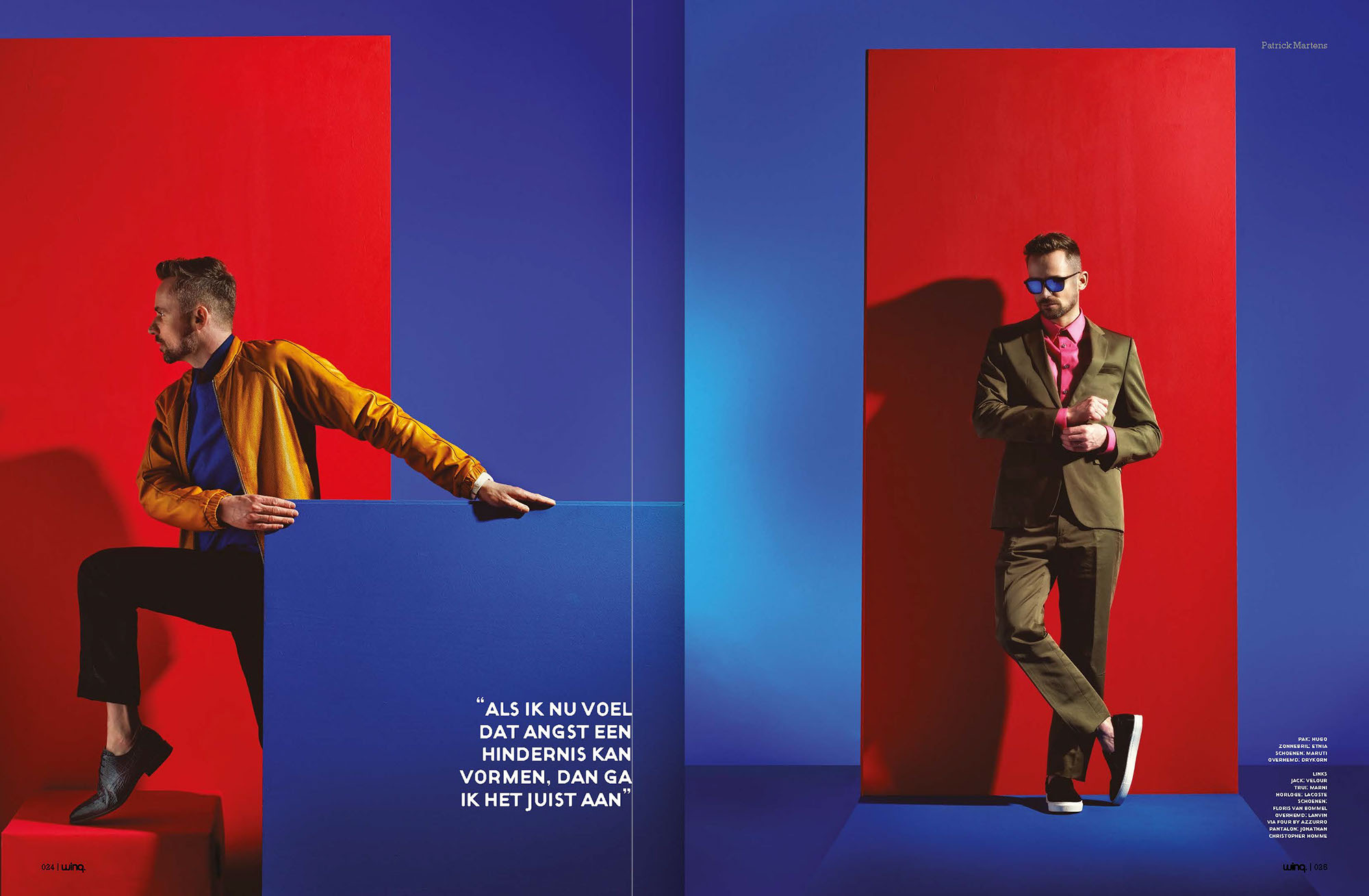 The View magazine hooked up with Juan Velazquez Caceres, fashion director at Winq Magazine, and we talk about his first forays into creativity, his writing and styling, working for magazines, and much more.

TV: Hi Juan, how are you? What have you been doing lately?

JV: I’m Good! I have been busy with setting up shoots and writing for the September Issue of Winq Magazine (The Netherlands), worked on the show for Jonathan Christopher Homme during the Mercedes Benz Fashion Amsterdam and started a side project which is still a secret.

JV: I was born in Lelystad, The Netherlands. I moved to Spain a couple years later, where I started to find my creative spirit in dancing which turned into a semi professional job by dancing in musicals. I moved to The Netherlands when I was 15 and kept on dancing this time for the Nederlandse Opera, but decided to quit because my feelings were telling me to get a good degree so I started studying International Business. During my study my urge to work in fashion grew. I did my final internship and thesis at PR agency Press Only. I graduated and started working at the PR agency, but after a few months I wanted more so I started to work as an assistant for one of my best friends and top stylist Sanne van Gestel. After a period of time I got an offer to work for JFK Magazine and that is how I slowly started to work for myself as a stylist.

TV: Like pretty much most creative people, you are very active with different things, let’s start with you being a writer. F.A.S, a website dedicated to menswear?

JV: I started F.A.S (Fashion is Always in Style) as an outlet of my thoughts and my views on editorials or new products. I created the website more as a way of letting my inner writer have his personal space. I understand a lot of people start a website more as a blog to put their outfits there and letting people know their style, but that just wasn’t me. I do not like taking pictures of myself in that way. After two years of writing I took the site down, because I couldn’t combine it with my styling work and I just wanted to really perfect my craft as a stylist. F.A.S still has a dear place in my heart, but you never know maybe one day it is back with a facelift.

TV: Comparing blogs that focus on menswear, what are the biggest differences back then and today?

JV: Back in the day the blogs which focused on menswear where really informing and bringing new brands to their viewers, those blogs are now websites and even have their own magazine, which I totally support and admire. Blogs nowadays for menswear pop up everywhere with not much new elements or creativity. The new bloggers are just posting almost the press releases, which they get send by the brands and don’t think about themselves as brands. Exclusivity and that it-factor in the new bloggers is a rare thing.

TV: How do you see the world of online writing, blogs/vlogs, and brands, for the near future?

JV: I think there is a movement that is clear that brands are using more the Internet and social media as the channels to reach their public. For the future I think video interaction between the brands and their target group will be a key factor of having an successful brand. Online writing will still be present, but the whole bloggers will fade away because the audience doesn’t want to wait anymore for a post but prefers to have a live vlog.

TV: Then you transformed F.A.S. into a full creative direction and production service?

JV: I turned F.A.S into a full creative direction and production service because my dear friend Sanne said to me that because of my diverse creative outlets that I shouldn’t name my business Juan Velazquez Caceres Styling. First I thought about if it would work yes or no, but eventually I started to think that I did different things in freelance so I decided to choose that name. The next morning I woke up went to the Chamber of Commerce and made it official. It has been the best choice I have made because people understand it better.

TV: Can you share about some projects and clients you worked on?

JV: I did a project for Stoere Vrouwen with Dutch Fashion Icon and actress Victoria Koblenko, which was my first big project and client back in 2012 and I was nervous because I wanted to do everything right and I really idolize Victoria Koblenko. The shooting went great and the energy was amazing. The learning moments of that project was really to believe in myself.

Another project was my second editorial for JFK Magazine. I had to do a ten-page editorial and I made all the sets and checked everything on the model before starting shooting. The fashion director of the magazine came by the shoot that day and started to ask me all type of questions about the choices I made of the sets and I replied to him that it was my vision and that it was something different and that I wanted to showcase me. The fashion director didn’t say anything and waited till the photos were edited and then told he saw what I said. The learning moment from that project was always follow your feelings and be yourself.

One of my favourites project has to be the first editorial I did for Winq Magazine back in 2013. I always wanted to do a shoot that was in an American style cool/sexy/sporty boy with a lot of colours, so I asked photographer Martijn Senders if he was up for it and we just set a date and did it. The entire time while we were doing the shoot I wanted it to be for Winq Magazine, so we still had to show it to the magazine. I got the number and email address of the editor and chief through a friend and called if he would be interested in the shoot. He told me to send it to his email and he would look at it during the weekend, but he said in advance that Winq Magazine didn’t really take editorials that were not set up by them. The photographer and I waited and on Sunday I got an email back from the editor and chief of the magazine that he liked the editorial but he wanted to change some images and to add an extra model. We did that and that is how that took place. The learning moment from this project was to always try! You always have a no, but if you don’t try you don’t know if it turns into a yes.

TV: You were also the PR manager at Sabon?

JV: I started to work for Sabon while I was doing my studies of International Business. It was a great part time job and I loved the brand. Sabon is a luxury beauty product for women and men that come originally from Israel. It specializes in natural products for body, hair, face and home products. Last year the shop manager of The Hague asked me if I wanted to comeback and help out during the celebrations day and I couldn’t say no to her. She is close to my heart.  After a couple of months I asked her who was doing the PR for Sabon and she introduced me to the people at the office and slowly I started to do the PR for Sabon. I was responsible for writing the press releases, contact person between the brand and the media, responsible for their social media channels and bringing their new concept Sabon Beauty Salon to the public and media.

TV: And recently started as fashion director of Winq.

JV: Yes, I started in April. I have been working for Winq now for two years and I really see everyone at the HQ as family and at the beginning of the year there was a feeling in me that I wanted to do more for the magazine. A few months before I got the job I was doing some shopping for the shoots I was going to do for the magazine and some people started asking me if I was the fashion director because I was always doing most of the shoots for the magazine. I said no because it was the case at that moment and just let it go, but during the shoot for the cover story of the April Issue I was asked by the agency of the photographer I was working with the same question I got during the shopping. Again I said no and from that moment that feeling of wanting more just took over.

I one day just went to the HQ of Winq and asked for a meeting with the editor and chief and said that I wanted to do more and have responsibility. With more I mean: writing, thinking about what subjects for the articles, editorials, interviews and to be more involved with the magazine. I sincerely wasn’t going for the title of Fashion Director even though I must say sounds nice. He said that he would think about it and after a week during press days he told me I could say that I was the fashion director of Winq. So now what I actually do is write for the magazine, set up the shoots for editorials and interviews and help thinking about how look and feel is for the fashion part of the magazine.

TV: Do you think this is the creative person of today and the future? Someone working for multiple brands in different roles?

JV: I think it is! When you are creative you want to use that creativity in as many different ways as possible. You will find that with different type of brands/magazines you can showcase your creativity in a whole different way, while still staying focused on their audience.

TV: What advice would you give to someone who wants a career in fashion, based on your experiences?

JV: My advice that I would give to someone who wants a career in fashion is that you need to be humble. Don’t come storming in like you own the world. Know what you are talking about and never brag about what you are doing or have done in the past. Enjoy every minute and never give up if it is your dream.

TV: What do you like to do to relax after a week of hard work?

JV: After a week of hard work I like to be with my boyfriend, family or friends. I like to go for a dinner or the movies. Not talk about work and just enjoy the time of being together and about the plans we have for vacations or getaways.

JV: Keep an eye out for the September Issue of Winq Magazine, the look book and campaign of Jonathan Christopher Homme SS16!

Images are copyright to their respective owners.