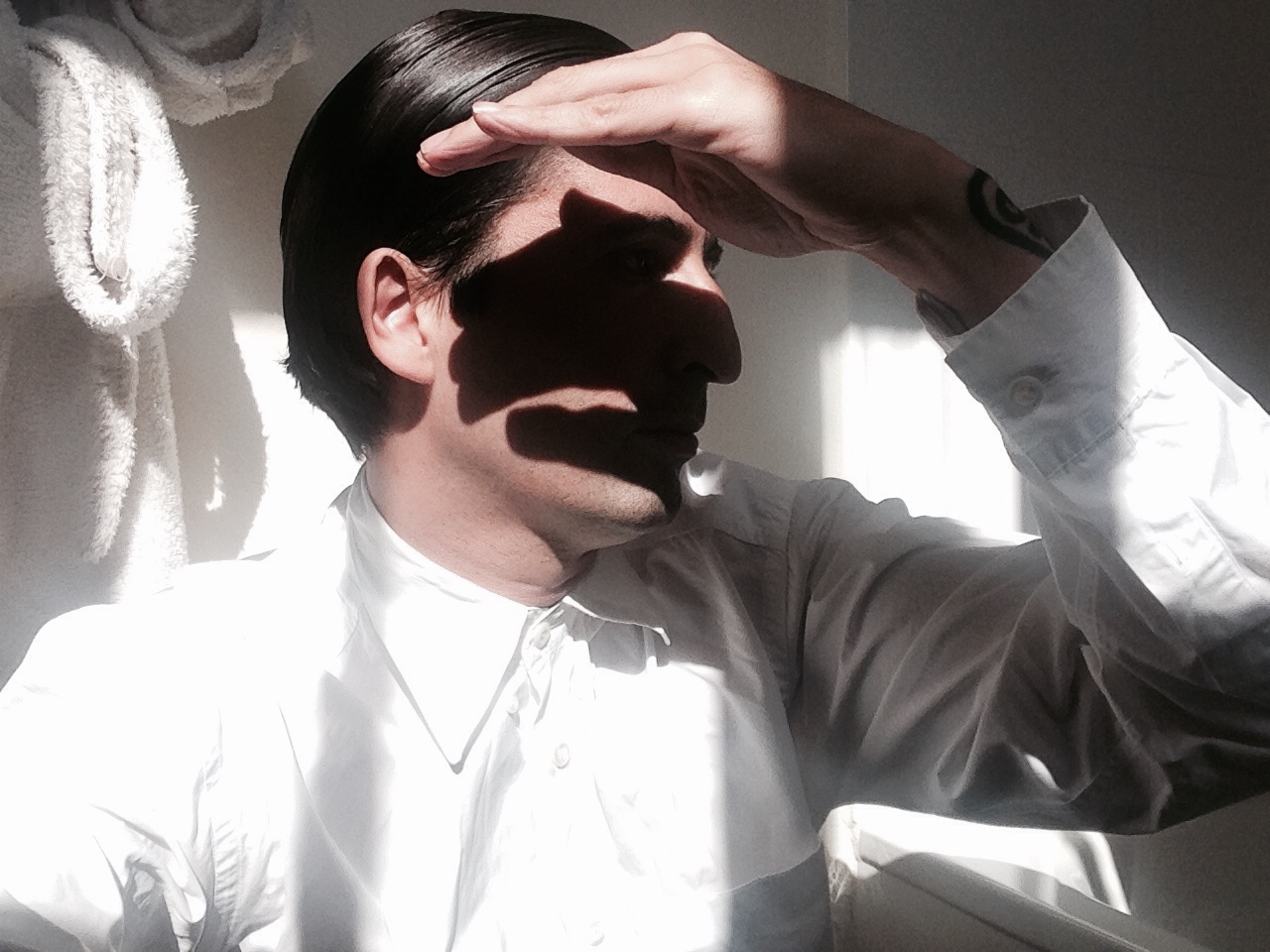 The View magazine interviewed London fashion designer Alexis Reyna, where we talked about his childhood, his vision of the fashion business, the biggest challenges as a designer, his latest collection called Hang ____, and much more.

AR: I love the zoo, as I lived next to it while growing up. It was such an amazing place to escape as a kid, seeing exotic animals. I had no internet back then so I enjoyed the exotic landscape in the middle of Barcelona. Also back then, the city didn’t have proper access to the beach and sea, all was a pretty dodgy neighborhood. So the zoo was a fantastic space to escape from the dirt, urban, routine. We would go in by a broken fence and soon afterwards me and my friends started to break in at night. It was an amazing experience where I had my first contact with violence, urban tribes, drugs, alcohol and all of that. I did had that dark, violent world around me and on the other hand, my mother who worked at the Opera House was the light, playing opera records at a high volume every day, and my father who use to paint paintings as a living for interiors. I had a mixture of cultures at home so I looked for similar things. My mother is Argentinian, with European and Uruguay native blood, and my father with French and Russian roots. I really had and still have a good relation with a half gipsy uncle, who sings flamenco in some local pubs around. He introduced me to esoterism. I also play music since my teenage years and play often in my fashion shows.

All my life I despised fashion since I didn’t have any interesting input on it and my only awareness was the “Paris fashion a la Robert Altman’s Pret-a-Porter”, and the Fashion Cafe era, the supermodels, … I thought it was terrible. After some crazy teenage years I ended up in Switzerland, in Lausanne where I got in touch with art and had some access to some cool fashion books. Back in Barcelona, I was diagnosed with an almost gifted IQ wich created frustration in my environment. I was advised to try learning to live with it. Then I decided I was tired to be broke and I wanted to make a regular income to save some cash, while I figure out what to do with my life. I got a job in a clothing store and I was approached by a model agent. I realized I could make more money than I could make in a month working my ass off at the bloody store, and at one day I said yeah, let’s do this. I got to work with interesting fashion fotographers and saw a really cool side of creative fashion and art. I was doing my own crazy editorial pictures and writing poems on them … but then I had a calling and realized I wanted to make collections.

TV: What is your vision on fashion, how does that translate into your own designs?

AR: It is obviously a symbiosis between the physical and the intellectual. I feel my earlier collections had a stronger physical approach. My work with textures and designing jacar fabrics, as well as hand painting was like making love to them. The cinematic experience is obvious and of course you always work with the photographic language, as a visual world comes together like writing a pseudo script. I hate dogmatic expressions, stereotypes, I rather explore “les fantomes”, that is relevant in my collections. Fashion has a connection with the subconscious world that has  an unlimited imagination. I deal constantly with life, death and rebirth in all my collections. I conceive my fashion as a constant dynamic expanding universe which could be the most beautiful thing ever made. In this constant dynamism there is challenge, change, the idea of not repeating, and put everything on the line. Like a gamble. Of course there is a DNA but there must be a constant creative challenge out of the comfort zone. I think if you look at my work , it speaks by itself.

TV: Which other designers do you like and why?

AR: I got stuck more or less a decade ago. I did study many of the classic maisons (Molyneux, Vionnet, Fath but also Dior, Chanel, YSL). As a self-taught individual I did enjoy fashion books, specially editions with at least 20 years since it was more focused on the garments, it’s construction, etc. When I enrolled in the Master degree in Saint Martins I did choose to do my research project of four designers, Chanel, YSL, Ralph Lauren and Helmut Lang. Quite eclectic. I also find interesting Armani 80’s Ready-To-Wear, Uomo, Vogue 80’s, Etro fabrics, Gaultier, etno related collections, Comme des Garcons early concepts, Dries Van Noten’s solid work and original shows early 90’s.

AR: I follow my own methodology which essentially is about putting out questions, those questions are from very simple ones like “what do I think about this color?” or “what does this color means?”, how this collection is going to reply to my previous one? I work a lot with my emotions, I don’t need to articulate them in a text. I just work with them inside of me and pull from threads. I brainstorm, I do a few sketches. But I generally have some picture in my head I want to work with, a model, the fabrics, and it comes naturally in my head quite clear. It always has to be honest. Coming from the heart. I guess things like my vinyl covers, science books I read, my fashion archive, bits of films I remember (I use to be a compulsive film viewer a decade ago), geopolitical articles I read in newspapers, the music I make. All that adds to it. I don’t travel much, I hate all the traveling cliches inspiration. I focus on my memories too, when I lived in China or when I was heartbroken. I imagine things and characters. I do like to capture certain feelings of random places, like when recently I was recording music in Berlin in this old 50’s hospital, the atmosphere between us three, I love perfumes too. They inspire me. I dislike those contemporary/avantgarde art cool images for research. Instead I can look at an old article on a Lui 70’s magazine, a Sotheby’s catalogue or Journaliste sans Frontieres photographic compilation. But I insist it’s much about my feelings and this picture I build in my head and play around with. It’s a constant work even while watching Pink Panther old cartoons which I really love. It’s really important when dealing with visual information, which is a really amazing language, to hide nothing.

TV: What are your biggest challenges as a designer? Does this have any effect on your designs?

AR: My biggest challenges are: to make every collection somehow better than the previous. Longevity is also a great challenge, let’s say be prolific producing as best as I can. Also to increase my resources since they limit much my work obviously.

TV: Tell us about your new collection. What is the idea behind that?

AR: My FW015 collection is titled “Hang____”, as a follow-up to my previous SS015 collection “Blue Candy” (which is a free interpretation of a Le Petit Prince story), I wondered about innocence in the context of a world defined by innocent and guilty. From dictation of Fatwas to executioners, to every day life technology allowing us not only to communicate instantly but to judge on others. Hanging is quite a graphic way to describe it. The idea of going on a dusty road as in a sketch of Goya and finding someone hanged on a tree. Did he do it himself, why was he executed for? It does have a poetic and brutal element for sure. And quite ironically there is a hole bunch of positive connotations to the use of the word such as hang around, hang loose, etc. That is why I used the “godet” technique on areas of some dresses, some are in the same tone as the dress, in other cases in a contrast of dark grey, and had a very clear idea to use mostly warm natural fiber fabrics such as cotton, wool. There was a beatic feeling in these images I wanted to capture. That is why there are that kind of uniform severity aspect in three outfits that counter the rest. There is a fine line paradoxally between the religious experience in joy and martyrdom, life and death, pleasure and pain, punishment, all the BDSM reflects that. Everything had to be elegant in a old but natural kind of way, still making something fresh, the idea of time lapse is there, the poetic timeless flower print to give that romantic touch. It was really important not to have any graphics as I wanted my collection to breathe free. I also wanted to reflect the “hanging rope” as an accessory like bows. Maria Novikova, my partner developed nice hand knitted elements and fastenings with wools and shoes.

AR: I am realizing the video for my latest collection in May, including music made by a new music project called AROXYWOLF, launched in Berlin this year. And my new collection SS017 wich already I am working on, which will be presented in September in London or Paris during Fashion Week.

Interview has been minimally edited to keep authenticity.