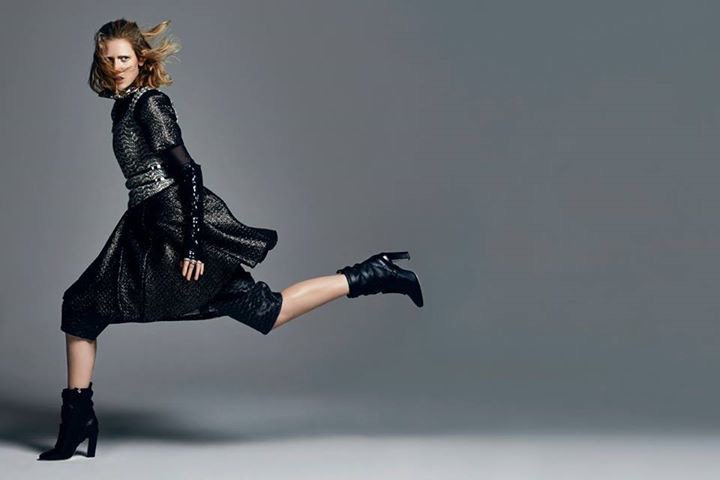 The View Magazine hooked up with Kee for a model interview. Kee is one of the top models at Paparazzi Models and IMG Models worldwide. We chat about her career, her opinions on the business and use of social media, and what brands she would definitely likes to work for.

TV: Hi Kee! Tell us a bit about who you are, childhood, what you liked to do?

Kee: Hey! I was born on July 14 in Haarlem, the Netherlands. In de mid of summer, which I think will define how a person will become for a large part. 18 months later I got a little sister, and another one 3.5 years later. Back in the days I used to hang out a lot with my second sister, but the last couple of years we hang out all together quite often. Looking back to my youth, up to age 12, I only have nice memories about it despite a couple of rough experiences. The girls that I hang out with at school are now my best friends. At age 13 I went to high school and can still remember the first week like it was yesterday. I had to throw up every day due to stress, didn’t know anybody else and was alone most of the time. After a couple of weeks I got some nice friends and the year eventually turned out pretty great. Starting the second year though, I hated school. I got bullied and didn’t get proper grades, had to redo the third year and barely graduated. I was always living to the summer holidays. Really happy when the summer was there, but still have nightmares about having to go back and finish for graduation. Before I got into modeling, I didn’t really know who I was. I didn’t have my own style, hobbies nor passions, I listened to the same music as everybody else, and aside from classwork didn’t do anything else. Might sound a bit negative, but I was actually a very bubbly girl, and I think my parents could easily distinct two versions of me: Kee at school, and Kee on holidays, where I blossomed.

TV: How did you got into the modeling business? Sent some pics, got scouted?

Kee: At age 12 or 13, I was shopping with my dad and sisters in Amsterdam, the Kalverstraat which is the main street downtown. Suddenly this man came out of nowhere and showed his card to my dad asking if I was a model. I was completely surprised! I have no idea what he said but I was in a sort of trance the rest of the day, that’s how surprised I was. Afterwards I visited the agency, but considered myself too young and the industry didn’t felt attractive to me either, so I let it go. Since then I have been approached four more times, two on the streets and two online. At 17 I sent a couple of pics to Paparazzi and a year later I started modeling full-time. Not a single moment of regret, and the time working in Paris full-time were the best months of my life.

TV: Can you walk us through your career?

Kee: I started at Paparazzi when I was 17. I still remember the email with the invite. During German-language class, I secretly tucked in my mobile in my pencilbag. I was so excited, I gave my friend some hand-signals, and then got caught and had to hand in my phone. So I went there and it felt right, everybody was so nice! It felt like I really belonged there. While still in school, I didn’t do a lot of jobs, but did my first editorial. It was so weird, people at school who never talked to me, said they seen me in Glamour magazine. After graduation the career didn’t go as planned either, I didn’t have the ‘correct’ measurements and there was no interest from agencies abroad. Then in January I had a chat with my booker Mo Karadag, and we agreed that the best thing for now is college. Later that day however, I got a message that I was going to Athens. I had a really great three weeks there, and when I got back, there were already three castings lined up for me with foreign agencies. The first one was with IMG and afterwards Mo came to me saying they really liked me, which I felt as well. Athens really changed me, I was very confident and mature, and a month later I went to Paris and had the best time of my life. I am grateful for the inner metamorphosis I went through while in Athens and Paris.

TV: Most people only see the glamour of working as a model, but there is a grey side as well, can you talk a bit about this?

Kee: Before I became a model, I always thought to know two things about the industry: it’s a horrible world, unless you’re at the top. But I was wrong. Modeling is definitely not just glamour. People usually say: you do cool things all the time, and when I ask them where they get that impression, they refer to my Facebook and what they see me posting on there. There were many times that I did Facetime with my family, crying because I missed them, I felt fat compared to the other girls, or that I had a really mean roomy. Those are the things you don’t put on Facebook, but are part of the business as well. Of course, I had also had my fair share of shoots going bad, annoying colleagues, but you have that everywhere. If you choose to be a model, you know that this will be part of it as well. I don’t have a 9-to-5 job and I can’t get a haircut without permission, but that’s the life I chose. I think there are more pro’s than con’s in this profession.

TV: From the usual four, shows, editorials, catalog/lookbooks and campaigns, what do you enjoy the most?

Kee: I am happy the most when my agency calls me with an editorial booking. While in Paris, Mo called me that I was booked for an editorial in Glamour. it was in a public park, but had a small tear of joy anyway, I felt really proud of myself. What I like about editorials, together with the team you try to tell a story, all the images need to convey that emotion, and I am really thrilled when we succeed. Magazines that are on my wishlist: i-D magazine, LOVE magazine, FAT magazine, W magazine, V magazine and the Dutch Vogue, so if you are reading this, please give me a call!!

TV: In recent years, there has been a huge increase in new agencies, founded by people without any former agency or model experience, and perhaps also without a good network. How do you look at all this?

Kee: I did notice this and had a chat about it with my agency once. There are a lot of models in the market, which only 5% of them might make it to the top. I find it difficult to express my opinion about this development, but it’s obviously tough to get noticed by the proper agencies. Sometimes I hear top models saying: it used to be one group of top models who also do all the shows. That time is past. Today a couple of dozen different girls walk the shows, and walking in one doesn’t guarantee a good career anymore. Breaking through became much harder. Also something not desirable, many of these new agencies don’t have a clue what they are doing. They want to earn as much money as possible, within the shortest amount of time, and are careless about their models. They simply don’t know how to build the career for the model. I think that people only may start an agency if they can prove of having experience and qualifications similar to those at established agencies. Same goes for girls, they really should check out the agencies to see if it’s a real fit and they really are taken care of. Top agencies should perhaps be more active on social media, so people can see how they behave and what they stand for. IMG does this very well, including promoting themselves on Insta, and receives a lot of requests.

TV: Talking about social media, do you use it yourself? What do you think about the use in general in the modeling industry?

Kee: Social media is really important for a model these days. There was a US Vogue cover last September called ‘The Insta Girls’. Victoria’s Secret shared a lot of pics last show and the VS models also shared a lot while working out and prep for the show. I get it, and I would have done the same thing if I was a VS girl, but it made me insecure. Last summer, I avoided social media as much as I could on purpose, because of the load of pics coming through during fashion week, and I really didn’t want to see it. It used to make me insecure and doubt myself what I did wrong, not being one of those girls. Now, I thickened my skin and just let it pass. Nowadays, models get scouted and booked due to their number of Insta followers, and share backstage pics and movies on Snapchat. Top models become celebs and brands make use of that, like a free promotion. Social media makes people feel being part of it all, which is attractive and therefore important.

TV: How do you see the world of fashion and media in the future? Major magazines have transformed their website, once only used to support the magazine, now a full fledged platform with rich content, are we going to embrace that anytime soon?

Kee: I fear that we will read everything online in 10 maybe 20 years. Most magazine publish articles and editorials online, I think that’s a shame. When I see a magazine with me in it, I love to buy and hold it. My parents also buy them and I am eager to show it to my children and grand-children already. It’s part of your life, a moment on paper that you can hold for the rest of your life. If everything is online it’s much harder. Websites cease to exist, pics will be replaced at some time. Your only hope is to have it printed on time. What if I don’t want to use my computer or tablet and just want to read, can I still do that on the beach or do I need to pull out a tablet? I think that’s a depressing image.

TV: Back to you. What do you do aside modeling?

Kee: I want to start at art school in September. To get admitted I need to create a portfolio with a minimum of 20 pieces, as varied as possible. Thankfully I am quite creative and enjoy spending the entire day sketching, taking pics, painting, etc. It’s something that I need to get used to, being a student from 10am to 6pm, but I am very motivated and can’t wait of having a studentlife. I agreed with my agency that my entire focus is on the admission at the moment, but once in, I like to combine my studies and modeling.

TV: Which brand and what kind of assignment would you consider your top mark of your career?

Kee: Above anything else, I would love to work for Prada. I like the simplicity of their designs, and the shows and campaigns always have this magic so it seems. I would love to be part of that someday.